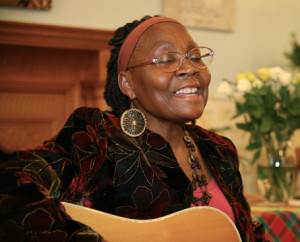 My storytelling draws heavily, though not exclusively, on the rural African-Caribbean Oral tradition of my childhood. It consists of songs, poems, stories. It includes rhythm games and dance.

Many of the games were rhythmic playground chants. Songs often accompanied circle dances; the work songs, used primarily to take the edge off back-breaking work, fostered as well a sense of community, prior to mechanisation. The games and work songs all naturally lend themselves to movement and dance.

My stories, some remembered, most researched and/or adapted frrom folk tales that were handed down through generations of African and subsequently African-Caribbean griots.

My poetry stems from the sheer love of the music of words, sometimes imbued with vibrant Caribbean rhythms. In my village, where dwellings were small and used primarily for sleeping, most “living” took place outdoors.

Life was a collection of small dramas enacted in the open, in full view and hearing of an audience, be it neighbours or a chance passerby.  The opportunities for humour and colourful language were myriad and not lost to my child’s “pricked up” listening ears.

One of the distinctive features of my poetry is the juxtaposition of English and African-Caribbean cultures.

For example, one of my favourite lines from the Met office weather forecast reads:

“There’s a band of rain moving from the west.”

In one of my poems called “Is it raining outside?”, this has been transformed into a Caribbean carnival band, moving through the streets, Notting Hill style and causing virtual mayhem.

LISTEN: to this 2016 interview I gave about my brand of storytelling.